Last week, I posted about my first stop to Lynden's Soda Fountain right here in St. Paul.  The owner, John Lynden, saw my post and invited me back.  Apparently, my root beer was not supposed to be served with ice, and his "jerk" screwed up.  (A jerk is someone who operates a soda fountain).  Here's part of his note to me:

Steve,
Thanks for stopping by the fountain and writing the review. I am sorry you got a Root Beer with ice in it. I will send out a memo to all of our jerks to remind them that you never put ice in the Root Beer.

Our root beer actually is not mixed it comes straight from a keg through the cold plate in the fountain. I always recommend enjoying it in a glass rather than a plastic cup.

I would like to invite you back for another root beer on the house and I would also like you to try our Sarsaparilla.

So my whole family stopped back yesterday. 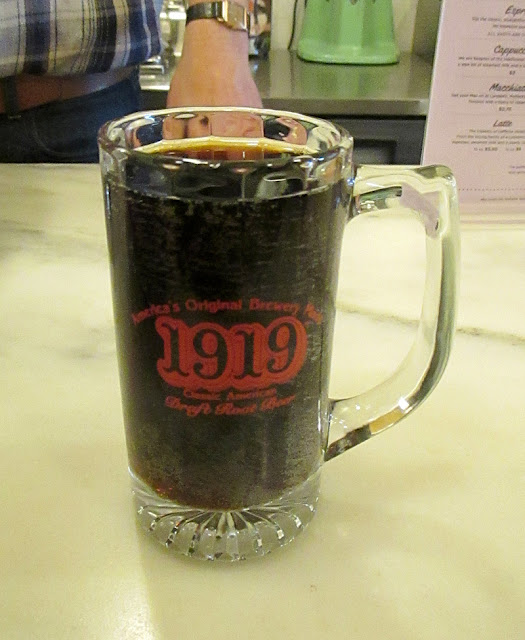 Review: I originally gave the Root Beer a 7.5 out of 10 in my post last week, but I'm bumping that up a point because it IS better in a mug and without ice.  The Sarsaparilla is very herby, spicy, and "sharp."   I need to drink more from a soda fountain, because everything seems to taste "crisper."  I sort of wish it were smoother, but I did like the sharpness.

p.s.  I STILL need to head back to Lynden's for a Lime Rickey.  And some more candy.  I'll be writing about them again within the next few months for sure.....  And a BIG THANKS to John Lynden for inviting me back!