I've had a cold for a few days, so I haven't been trying any new sodas. It wouldn't be fair right now because everything tastes like bland potatoes to me.

So instead, I'll leave with with a warning. It turns out that sugar is bad for us. Who knew.

Just take it easy on the candies and sodas and HFCS, and we'll get through this just fine. Life in moderation.

Posted by Steve Stenzel at 12:39 PM No comments:

I opened my first bottle from Frattallones Ace Hardware. 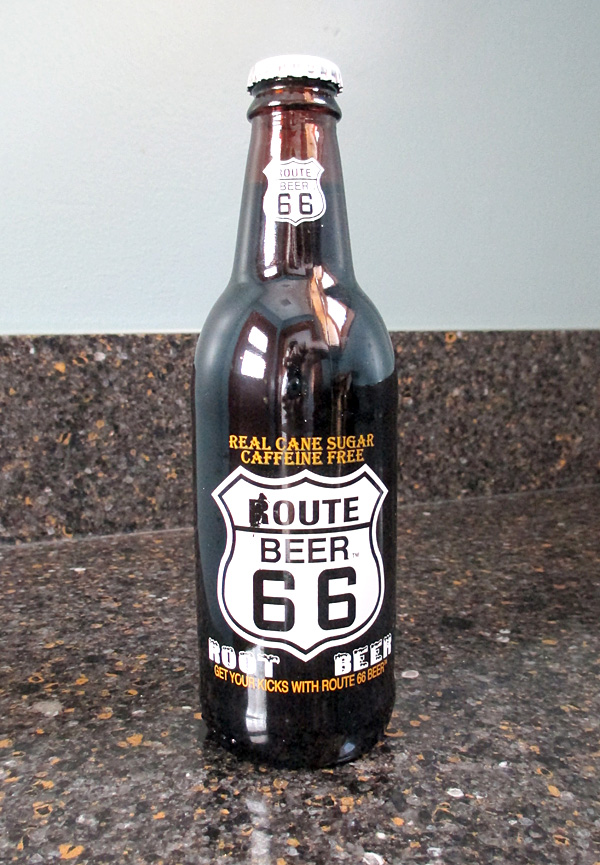 When I checked their website, they had a link with recipes: cake, frosting, pulled pork, cookies, etc. I'll have to try some of those out sometime!

Review: Overall, it's smooth, deep, has a subtle-carmel flavor, and nice amount of vanilla. This was quite delicious from the first sip. Pretty smooth with a little bite. This ranks up there as one of my current top-10 favorites.

Posted by Steve Stenzel at 10:39 AM No comments:

A New Place to Get Root Beer in the South Metro!

About 2 months ago, someone named Mike sent me an e-mail. Here was the first part of his note:

Hey Steve,
I found a really weird but great place to buy root beer if you're ever in the south metro - Ace Hardware in Burnsville.  It opened a few months ago and I went in to get some caulk and saw a glorious row with about 50 different kinds of soda!  It's mostly root beers but also some cream soda, ginger beer, and others...


On Thursday night, I was heading back to St. Paul from south of the Metro, and I thought I'd swing by and check it out. It's right on County Road 42, just past the Burnsville Mall on the north side of the road, so it's only about a mile from the 35E / 35W split.

I walked in and a woman asked if she could help me. I smirked a bit and said "I heard you have a lot of root beers..." She smirked back and said "Follow me..."  We stopped at this:

I started filling a box, thinking I'd get maybe a dozen different kinds. (There's a price break at 6 bottles and at 24 bottles.) Well, the first time I stopped to count how many bottles were in my box, I already had 20. So I figured I'd grab 4 more and get the "24 bottle discount." (I saved about $0.25 / bottle by getting 24.) Here's a photo of what I bought once I got it home: 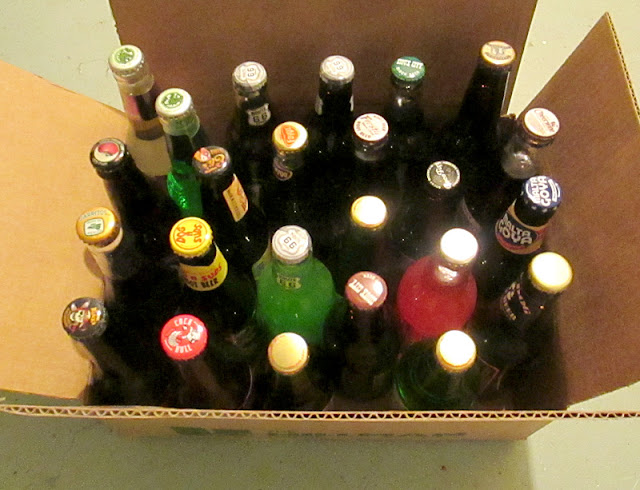 The woman who lead me to the sodas and chatted with me as I picked out my selection mentioned that a good dark rum is GREAT with Birch Beer, so I'll have to try that some time.

Oh, and just so I remember what 24 kinds I bought, here's a list of what's in the box:


(Next time I stop by, I'll bring this list to make sure I don't get any repeats...)

I've liked Goose Island Root Beer for a year or 2, so when I saw their Vanilla Cream at the grocery store a few weeks ago, I had to grab a bottle. 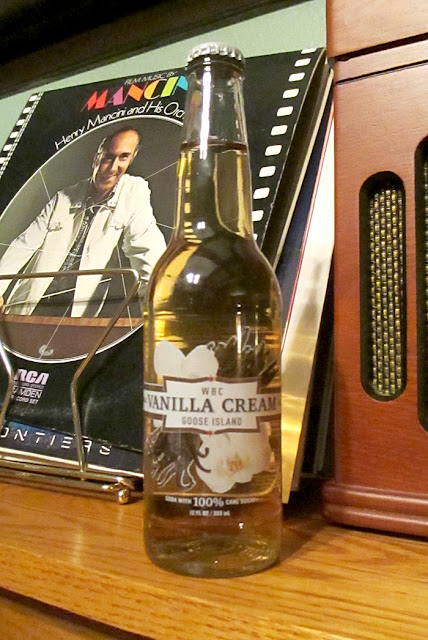 Review: Very smooth with a strong vanilla bean smell and taste. Great initial flavor - sweet and delicious with a little bit of a punch. The aftertaste isn't as great, but I'd definitely have this again.

Posted by Steve Stenzel at 6:53 PM No comments:

I've had this soda hanging out in my basement fridge for the past year. Time for some good Spring Grove Soda: 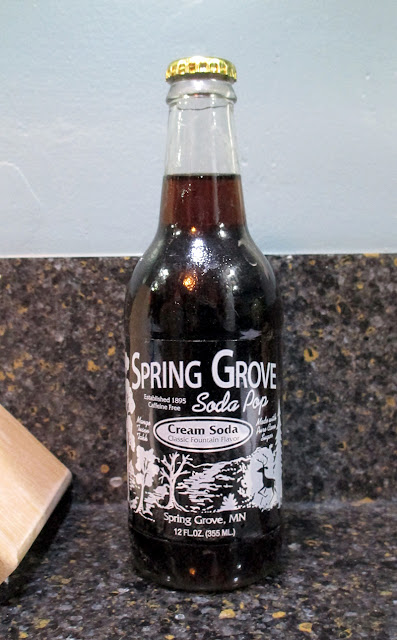 Their website says: "Our cream soda is one of the best on the market. It definitely will take you back to your childhood when cream soda’s were dark in color with a noticeable taste of vanilla. This one is also good with a mix of Captain Morgan."

Review: This has a strong, full, and deep vanilla flavor. It's really strong and syrupy. It's one of my favorite cream sodas. If you like sugary / syrupy and vanilla flavor, you'll love this soda. (And I can see how it WOULD be good with a little Captain.)

Posted by Steve Stenzel at 4:03 PM No comments:

My wife told me this would be the best or the worst root beer we'd ever have - it was the most expensive root beer she'd ever purchased. 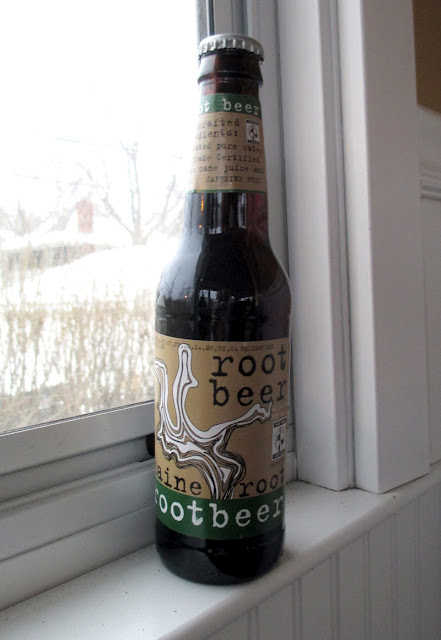 The bottle boasted all kinds of natural and fair trade ingredients. Their website says "Handcrafted soda made with Fair Trade Certified organic evaporated cane juice.  Open a bottle and taste the flavor of extracts of wintergreen, clove and anise.  Our recipe combines these ingredients with FAIR TRADE CERTIFIED ORGANIC SUGAR to allow the flavor of each of these extracts to come through."

Review: The first 2 things I noticed was that it was quite watery, and it had a very herby and spicy flavor (not "hot" spicy, but "spice shop" spicy). The carbonation was a bit too weak. The spices were a bit much, but at the same time, the flavor was weak and watery. It needed MORE and LESS at the same time.

I bought this because I liked the label: 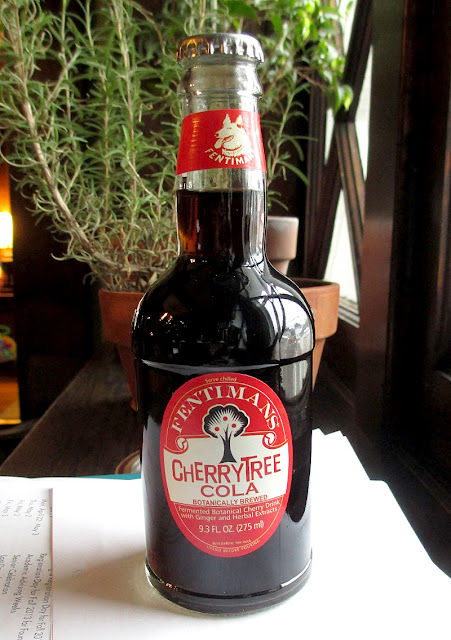 Review: The cherry was very "deep" and dark. I'd nearly consider it a black cherry flavor. There's not a ton of carbonation, and there's a nice bite. I was trying to think of how to describe the bite before I looked at the ingredients list. It turns out the 2nd ingredient (after carbonated water) is fermented ginger root extracts. I'm not a huge fan of a big ginger bite in my sodas, but this was relatively subtle. I'd try this again.

Posted by Steve Stenzel at 10:36 AM No comments:

My wife did some grocery shopping and came home with a treat for me last week: 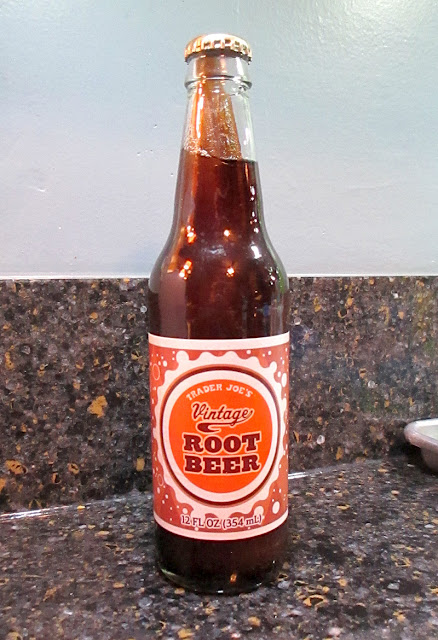 She put it in the freezer to chill it quickly, and as you might be able to tell from that photo, it nearly froze solid before she told me there was soda in the freezer.

Review: I was quite surprised for it being a "store brand." This was good. Really good. The kick of wintergreen is nice but not too much. And the same goes for anise - I do not care for heavy anise flavor, but this is just a perfect little hint. It has a solid ingredients list - here are some good things to see: cane sugar, wintergreen birch, sassafras, and Tahitian vanilla. It's smooth but flavorful. This ranks up there as one of my favorites. My wife really liked it as well, and she said it has perfect flavor for root beer floats. However, I'll have to drink a bottle that hasn't been frozen first to confirm my feelings on this root beer.

This past week, I was heading to a impromptu "Photo Lab" party where I work. (One of my work-study students brought a former student back to visit, and a few people were gathering to catch-up and party.) So I thought I'd bring some beverages. 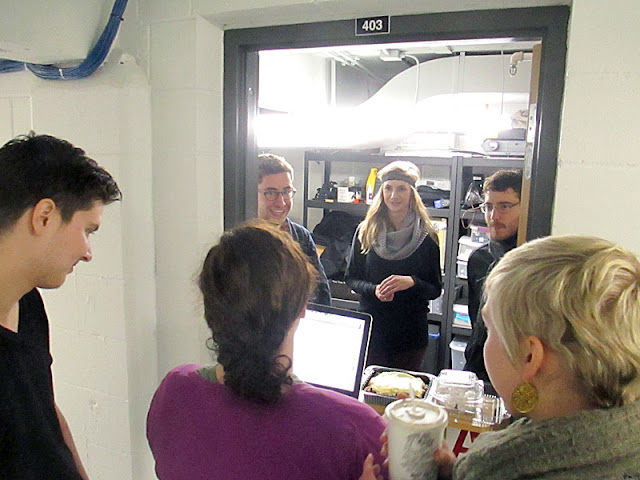 I saw some Thomas Kemper Root Beer at Kowalski's, and someone commented on this post that it was good and I should try it. It's a "higher end" root beer. So I grabbed a 4-pack to share. 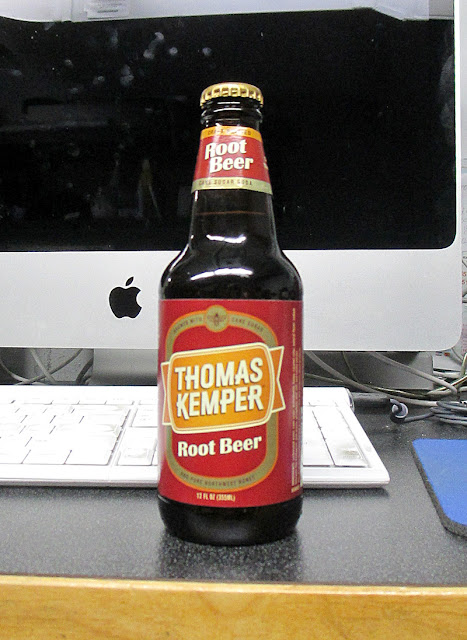 Because some of those students knew about my "root beer blog," I told them to tweet me their reviews and I'd post them. Here's what they all said:


Michelle said "that pop, soda, or whatever foul beverage that was- tasted like what pop will taste like when the world ends. #apoptolyptic" [spelling fail]

Jake said "there was something wrong with that pop."

Liz said "it tasted like root beer. But with a specialness to it. It was like roots and beer. With a ginger root-y-ness too. #forreals"

Sawyer said "If i had rank that rootbeer on a taste scale of 1 to 10 I'd rank it an overly frosted turd."

Elly said "The RB was pretty good. I thought it was a little sweet at first, but it had a nice flavor that lasted for a while."  And in a 2nd tweet, she added "and also it's sweetened with honey which I thought was pretty cool."


So obviously Elly was the only one who was a little impressed, and Liz thought it was OK as well. But Sawyer nailed it on the head.

Review: It tastes strange from the first sip. I first described it as "burnt brown sugar." You can taste the honey, but that has a burnt taste as well. There's a mix of smooth and bite that was good, but that's ALL that was good. I think this was the first root beer that I didn't finish.

Posted by Steve Stenzel at 11:27 AM No comments:

Review: Too "smokey." It almost tasted burnt. I wanted to like this a lot more, but I was really disappointed. It didn't even taste like root beer to me - it was like bad cola. No thanks. (I think I'll have to try Dad's again because I don't remember it being this bad when I've had it in the past. Stay tuned for an update on this.)