I brought a few snacks to a student organization meeting 2 weeks ago. I also brought a 2 liter of grape Faygo: 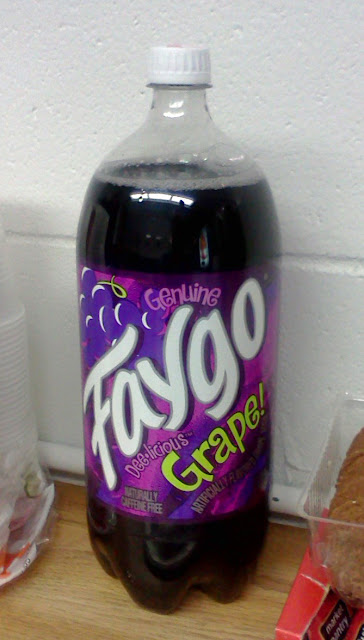 Actually, I took a photo showing more of the junk food around the Faygo, and I instagramed that: 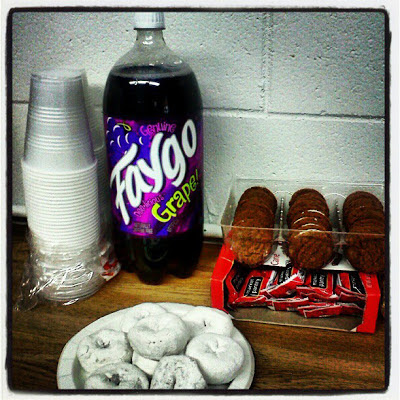 I looked online, and did you know that the Faygo website has an entire section with RECIPES? You can use their soda to make lots of different things. I'll have to try a Faygo recipe sometime... I'll make sure to report back if/when I do.

Review: You'll like grape Faygo if you like "syrupy" drinks. One of my students remarked "it reminds me of Dimetapp cold medicine" (she meant that in a good way). It has a bit of a "classic" soda flavor. It IS pretty sugary, and it's hard to take in large quantities. But the flavor is good and strong.

Posted by Steve Stenzel at 12:33 PM No comments:

Sunday night, I was grilling burgers and peppers in the garage. I figured a root beer would go along with that quite well.


Right away, this root beer had a strong wintergreen flavor. I liked it quite a bit. I went to their website to find more info, and I found out they had a lot of other sodas. I was thinking about ordering a variety case, but they only sell individual flavors as a case. Dang. I'd love to try their other flavors, but I'm not willing to try 24 of ONE flavor at a time.

Review: Strong, smooth flavors. It was heavy on the wintergreen, but not to the point where it got to be too much. Good vanilla flavor as well. This was GOOD root beer. 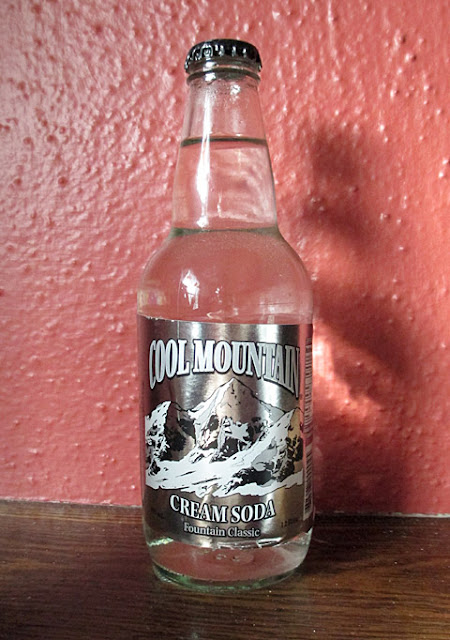 Review: This was pretty good. If you like "plain" things, you'll like this. It's simply sugary and smooth. There's not a lot of flavor, but the flavor that's there is spot-on.

Posted by Steve Stenzel at 10:22 AM No comments:

The first Root Beer I reviewed on this site was Simpson Spring Root Beer. I also had purchased a bottle of their "Lemon & Lime Soda," and it was time to crack into that:


I wasn't sure about the unnatural color that this soda had, but it turns out it was DELICIOUS. (And I like the 10 oz bottles - it's a nice amount without being too much.)

Sweetener: Sugar and/or Dextrose and Fructose.

Review: This was very different from other Lemon-Lime sodas that I've had, and it's a little hard to describe. It was heavier on the Lime, but it wasn't tart - it was still very sweet and smooth. I've tried some bad Lemon-Lime sodas lately, and this one was by far the best. I'd go purchase this again in a heartbeat.

Posted by Steve Stenzel at 10:15 AM No comments:

I've got a few bottles of Sarsaparilla left in my case from "Minnesota's Largest Candy Store," and I was in the mood for some late last week. I grabbed some Barons Boothill Sassparilla. I wasn't impressed. 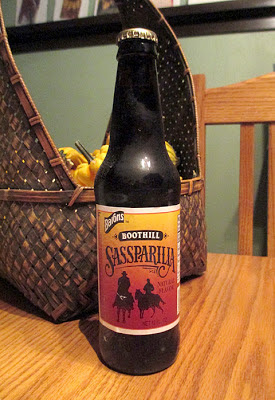 Review: If you gave this to me out of the bottle, I wouldn't know what I was drinking. It tasted more like a "strange" cherry cola than a Sassparilla. It didn't taste horrible (if you told me it was cola I wouldn't have thought much about it), but there was a bit of an unnatural aftertaste. Not great.

Posted by Steve Stenzel at 1:48 PM No comments:

Last weekend, I had my first homemade root beer since about 5th grade.


It was from Steve Q, who I met about 2 years ago through my triathlon / running blog. Since then, we've met-up at a few races.  He knew my wife and I were going to be cheering at the Monster Dash race, so he met us with his root beer. Apparently, both Steve and I are BIG root beer fans.

The first thing I noticed is that it hardly had ANY head in Steve's root beer. He said that people making their own root beer have to add some weird things to add foam, and he'd rather keep "weird thing" out. The best thing he asked before he let me try any of it was "You're not allergic to much... are you?" I knew I was in for a treat.

Brand: "389" (named for the bottle Steve mixes it in, which was used in an analytical chemistry lab in the 1980s)

Review: Thick, flavorful, and delicious. (Notice the ring it left in the cup in the photo above.) It could have used some foam, but it was still REALLY good.