My first Rocky Mountain Soda wasn't that great, and I was hoping this would be a bit better: 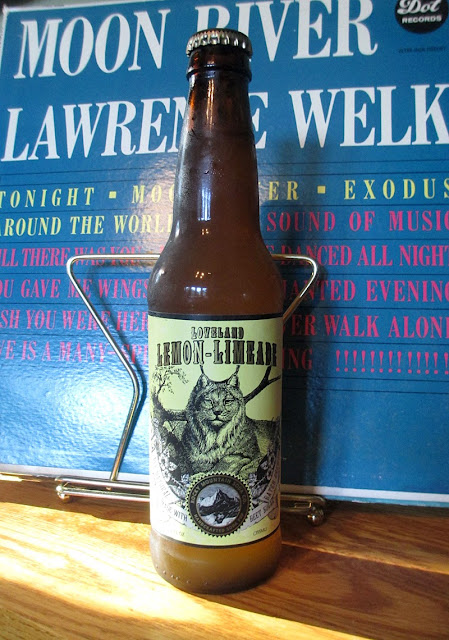 Review: This didn't stand out as anything super special, but it was GOOD. Lemon Lime soda is usually "crisp," but this Lemon LimeADE leaned more towards "smooth." It had good Lemon Lime flavor, and went down nice like a sweet and just slightly tart lemonade. Nothing too special, but still a decent soda! If you like Lemon Lime or Lemonade, check out this Rocky Mountain Soda Company Loveland Lemon-Limeade.

Posted by Steve Stenzel at 12:30 PM No comments:

This was my 2nd "Soda Shaq." The first one left a horrible taste in my mouth (both literally and figuratively) so I wasn't too excited about trying the other 3 that I had. But I recently cracked into this Blueberry Cream on a hot afternoon: 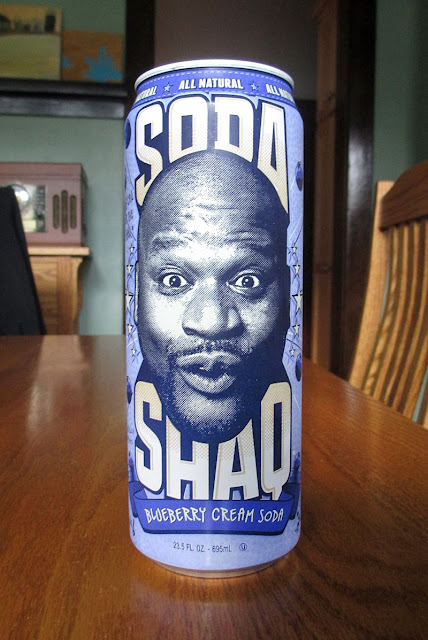 Review: When I cracked it open, it smelled strongly of blueberries... I was optimistic. And it really didn't let me down! It has a crisp, "clean" bite of blueberry, and then it left a creamy smoothness at the end. My last soda had way too much honey in it, but this just had a nice refreshing touch. It had a good subtle vanilla flavor from bourbon vanilla extract as well. This was a surprisingly decent soda! (It'd be good with liquor - maybe vodka...)

Posted by Steve Stenzel at 7:58 PM No comments:

I was quite pleasantly surprised with Killebrew Root Beer last year, and now it was time to try it's sister: 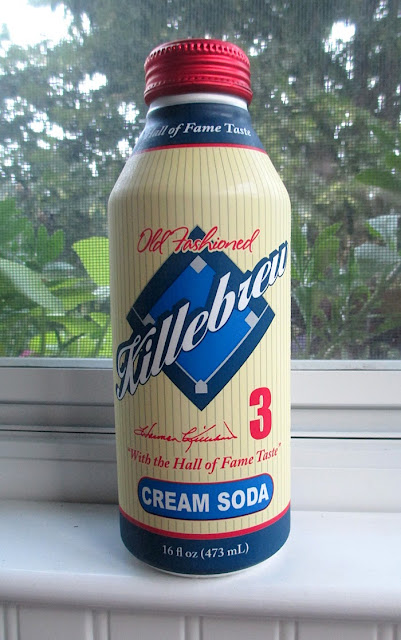 Review: I liked Killebrew ROOT BEER because it had a nice subtle sweetness from "Minnesota Honey." But my first sip of this Killebrew CREAM SODA tasted like nothing BUT honey. I really like honey, but this was just too much and too strange in this cream soda. It was more "honey soda" than it was "cream soda." If you really, really, really like honey, maybe try this. Otherwise, I don't recommend it.

Posted by Steve Stenzel at 2:13 AM No comments:

For my 100th post, I thought I'd do something fun. I spent the morning with my son at the Minnesota State Fair (it's opening day!), and we stumbled across this: 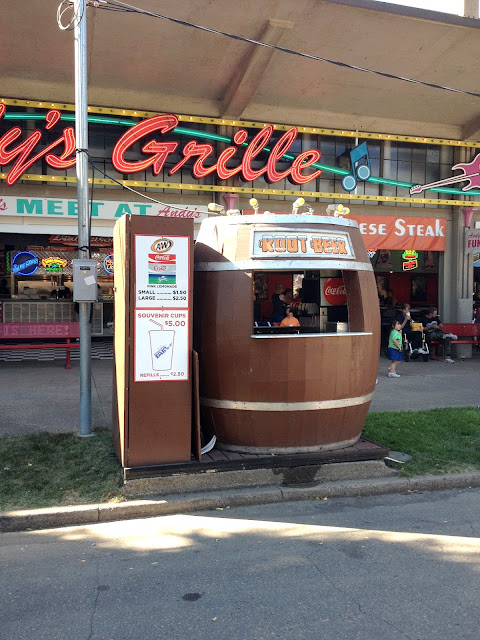 Only $1.50 for an icy glass of root beer? I needed something refreshing after chasing my 2-year-old around the fair for a few hours, so I bought a cup. 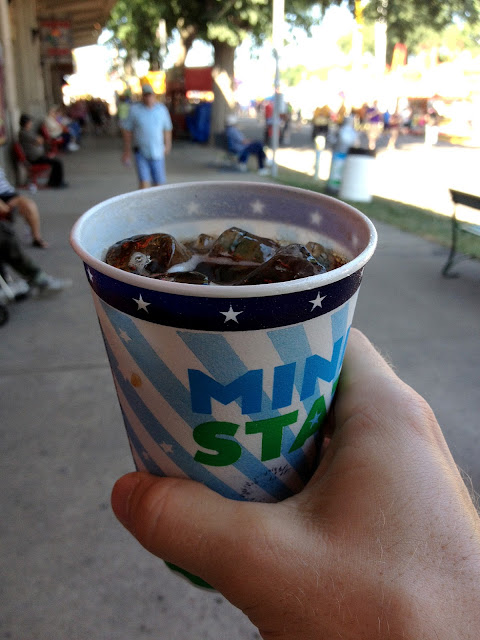 The sign said A&W (see the top photo), but the tap said Barqs, so I'm not really sure what it was. And I was too thirsty, so I didn't really stop to think or savor it. I just chugged the frosty deliciousness.

I should have walked a few blocks with the root beer because it would have been PERFECT with this fried (of course) "Minneapple" apple pie and ice cream: 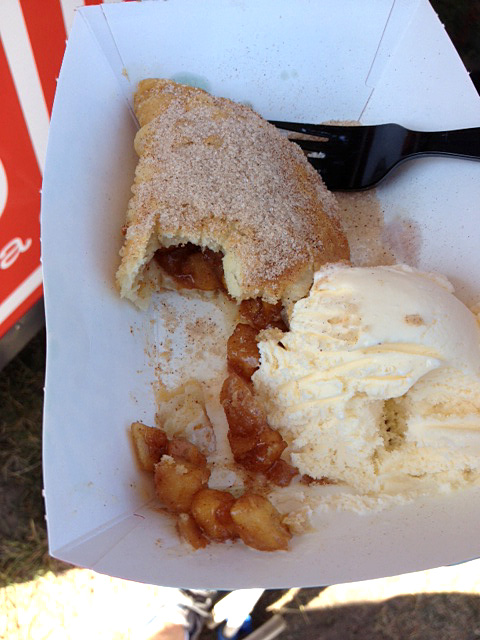 Enjoy the closing days of summer!

Of the 4 kinds of "Soda Shaq" that I was just sent, I wanted to try the least-offensive sounding one first. So I grabbed the can of Vanilla Cream Soda.

Review: I did not care for this. It simply tasted "fake." There was almost a chemical-like taste to this. The vanilla didn't taste right, and the cream was off too. There are some sodas that I don't care for, but I can see how SOME people would like it. However this is not one of those - I can't see anyone liking this soda.

Side note: I had horrible gas later in the day after drinking this, but I'm pretty sure it wasn't related. But it might have been. Shaq, I don't trust you...

Time to crack into the first bottle from my surprise shipment of sodas. 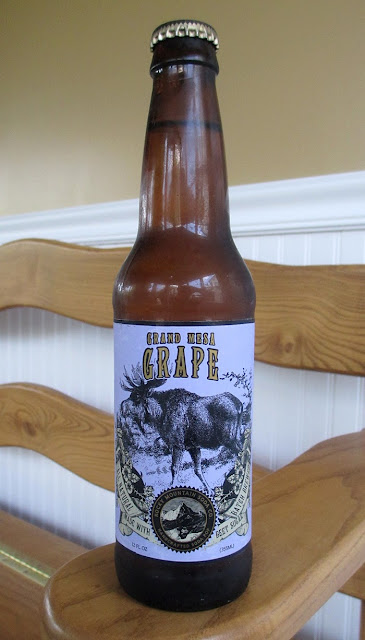 Review: Very strong grape smell - syrupy like cough syrup. But it's almost like it's over-cabonated, and it has bit more of a bite than I'd like. The grape flavor itself is good, but the rest needs a little something more. Or less. I'm just not a big fan.

Posted by Steve Stenzel at 2:30 PM No comments:

Goodies in the Mail

I got a surprise on our front step yesterday. 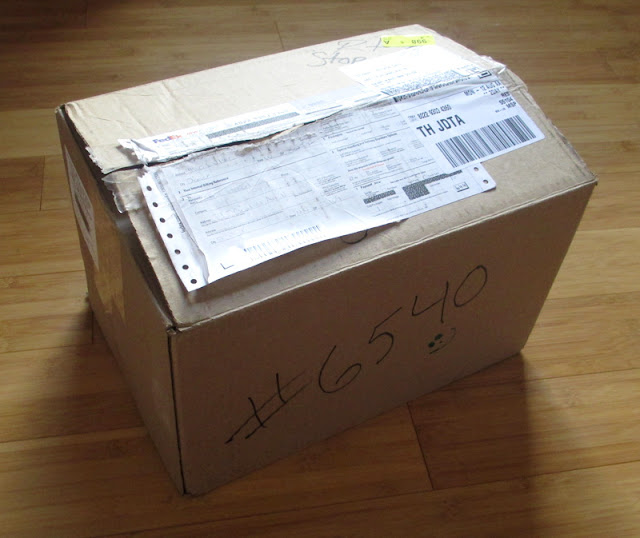 Theresa and Brandon tell me that Soda Shaq is a 7-11 exclusive, and that the 6 others are from local brews ("local" to them in CO). They hadn't tried them, so they're curious what I think of them.

THANKS GUYS!! I'll be trying these all shortly, so check back to see if I like having some of Shaq's cream in my mouth...

Posted by Steve Stenzel at 8:06 PM No comments:

"Curiosity Cola" - that intrigued me. 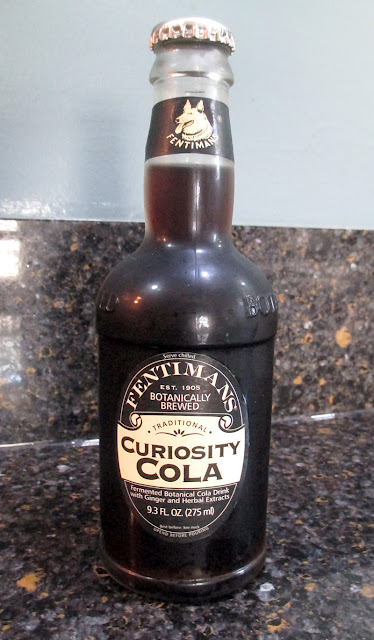 I saw one of the ingredients was "fermented ginger root," and I wasn't sure what I would think of this. I like a little ginger bite, but not TOO much.

Review: This was a bit better than I thought it would be. The ginger is pretty subtle, but it adds a nice different bite to it over traditional cola. The cola flavor itself is a little subdued and not very overpowering at all - in fact, the cola flavor could be stronger. There's a another sharp, crisp, almost citrus-like flavor that I think comes from the juniper. If you like colas that have a little something different to offer, check out Fentimans Curiosity Cola.

I cracked into this bottle on Sunday night, and I thought "weird, this doesn't smell like ANYTHING." 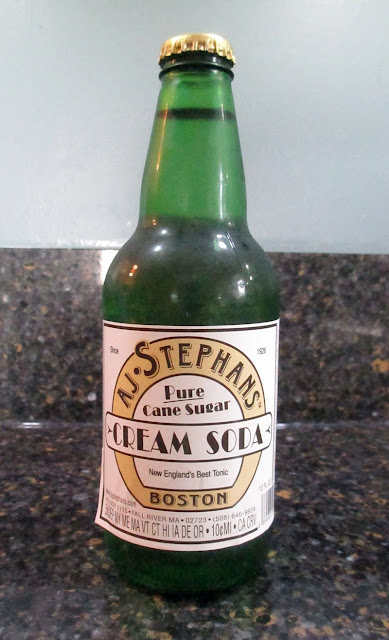 I had their root beer a while back, and it was pretty good. How would this rank?

Review: It was a pretty good "smooth" cream soda. It had a strong "vanilla bean" flavor to it that was refreshing. Nothing else really stood out, but it was pretty good overall. Bottom line: it was a decent Cream Soda.

Posted by Steve Stenzel at 2:29 PM No comments:

I knew nothing about this when I grabbed it. I thought it sounded Mexican. 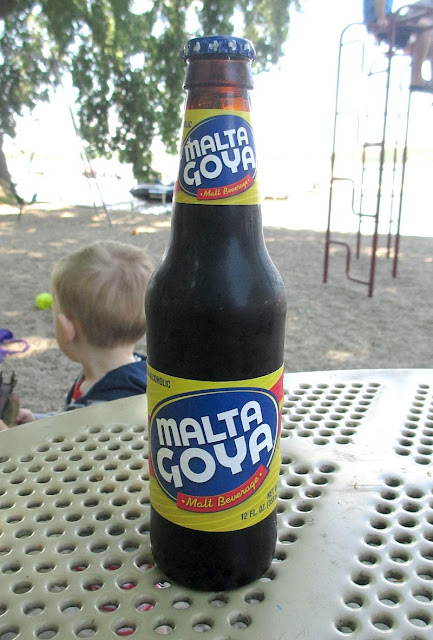 It had a distinct (not good) taste. I had to look up more info. I found this on Wikipedia:


Malta (also called young beer, children's beer, or wheat soda) is a type of soft drink. It is a carbonated malt beverage, meaning it is brewed from barley, hops, and water much like beer; corn and caramel color may also be added. However, Malta is non-alcoholic, and is consumed in the same way as soda or cola in its original carbonated form, and to some extent, iced tea in non-carbonated form.

In other words, Malta is actually a beer that has not been fermented. It is similar in color to stout (dark brown) but is very sweet, generally described as tasting like molasses. Unlike beer, ice is often added to Malta when consumed. A popular way Latin Americans sometimes drink Malta is by mixing it with condensed or evaporated milk.

It DOES taste like molasses. And not in a good way. I'm curious how it would taste with condensed or evaporated milk as suggested. I might have to try that. Key word: might.

Review: It wasn't good. Not at all. It wasn't even that "interesting." It tasted like thin, carbonated, nutty molasses. Yuck. Maybe the best line I found about it online was on UrbanDictionary: "A substance so terrible that it's creators should be murdered, or worse, forced to drink it themselves." Yep, that's about right. I'm giving this my 2nd ever "1" rating.

Posted by Steve Stenzel at 9:50 PM No comments: