I opened this earlier today after coming home from my J-Term class: 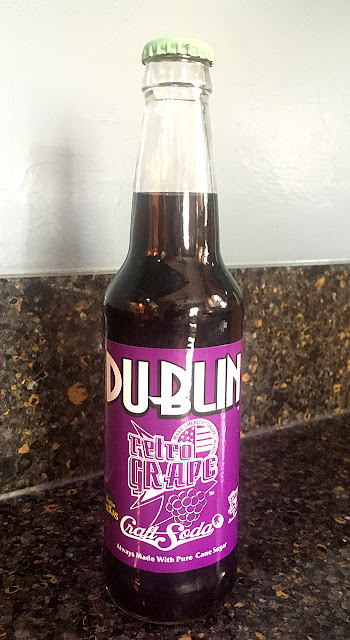 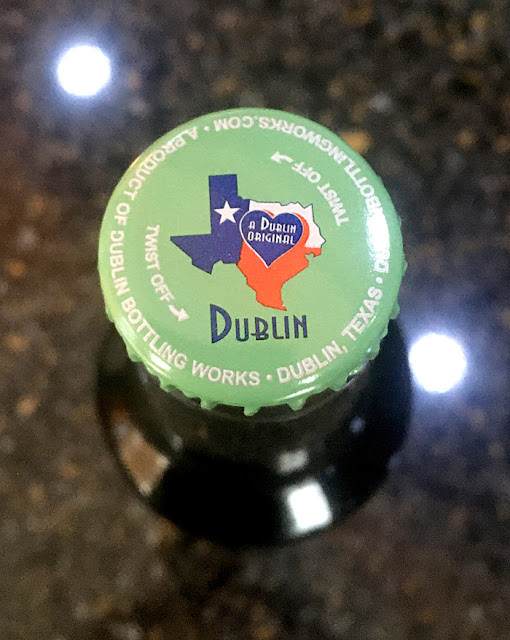 Origin: Dublin, Texas (I mean, I'd HOPE that was the case).

Review: Oh yeah. This is good. It's what I hoped it would be: a sugary, syrupy grape soda. It goes down easy and has a bold taste. Smooth and delicious. (And both of my boys loved this one as well... although their tastes aren't that discerning...) I've had 2 other "Dublin Texas" sodas in the past, and one was OK and one was quite good. This 3rd one was probably the best. This gets a high score.

Posted by Steve Stenzel at 8:10 PM No comments: 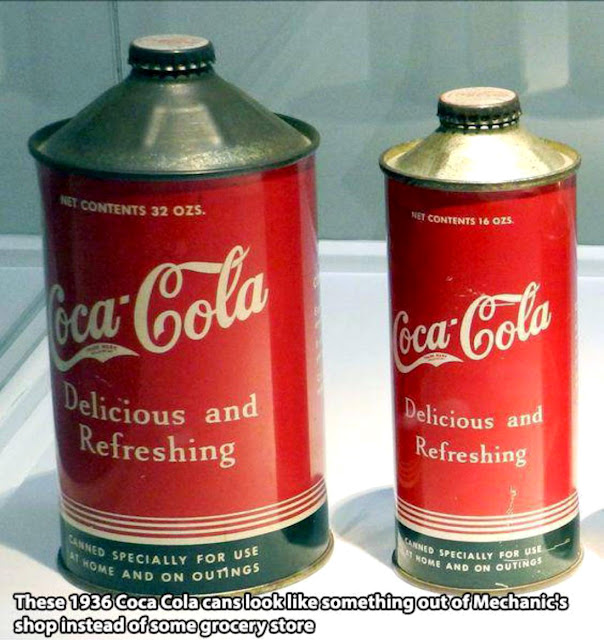 Posted by Steve Stenzel at 7:50 PM No comments:

My wife bought me this on New Year's Eve, and I had it with my boys: 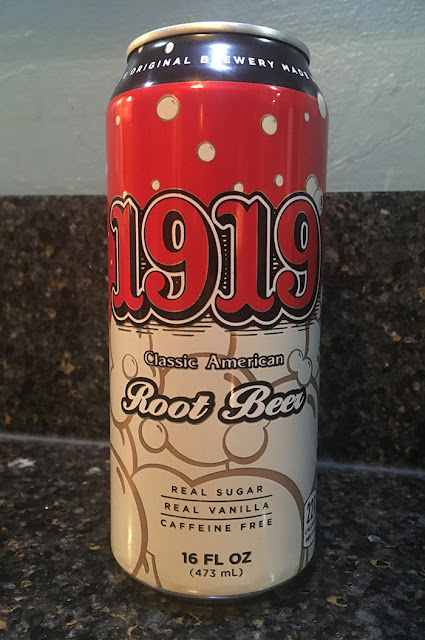 Review: First of all, I thought I had this YEARS ago, so I've been passing it up when I've come across it. But it turns out I've never had it. It might be the same as the root beer I had 8 years ago from Lynden's Soda Fountain (now "Cold Front") because the mug had this same logo and the same phrase at the top: "America's Original Brewery Made 1919 Classic American Root Beer." (And maybe part of the reason I thought I'd had this before is that I posted about the pony keg they had of this at Kowalski's back in 2015.)
So how was it? It was VERY strong on the vanilla. It was quite creamy! I poured out 2 glasses for my boys (as this is a big 16 oz can with lots to share) and it formed a good head. I wish the flavor was a little "deeper" though as it seemed a little weak. But that's about my only complaint - otherwise, it was smooth, creamy, heavy on the vanilla, and light on the anise which is the way I like my root beer.

We recently got together with my parents for Christmas, and they just opened a bottle of "Casey's Cola" that they didn't want to keep, so they sent it with me:

Origin: Ankeny, IA.
Purchase Place: Casey's General Store, Wells, MN.
Sweetener: High Fructose Corn Syrup.
Review: This was a bit weird. It had that strong and sharp "fruity" flavor of some colas that I like, but it was super sharp in this one. It was just harsh to drink. It was OK to sip, but it wasn't that enjoyable. I know that there are people that will like this sharpness, but it wasn't for me. It wasn't HORRIBLE, but it's just not what I'm looking for out of a cola.

My boys and I brought another one of the Blue Sky Sodas that my wife bought me on a recent trip up to Itasca State Park:

Review: I've made this mistake before: when I took a sip, I was surprised that it was a CLEAR and NON-COLA "black cherry." That's my own issue - I just see "black cherry" and assume cola for some reason. Once I was past that, it had a pretty decent flavor. It seemed a LITTLE weak, but I think I was just visualizing that it was clear, and it was affecting me. It was good, but nothing special. I'll rank it just over average.

Posted by Steve Stenzel at 1:52 PM No comments:

My wife was out getting some groceries yesterday, and she grabbed a few Blue Sky sodas. The cashier was ADAMANT that Blue Sky's Cream Soda was one of his favorite sodas of all time. So she went back and grabbed that for me to try. And then she wanted me to try that one first: 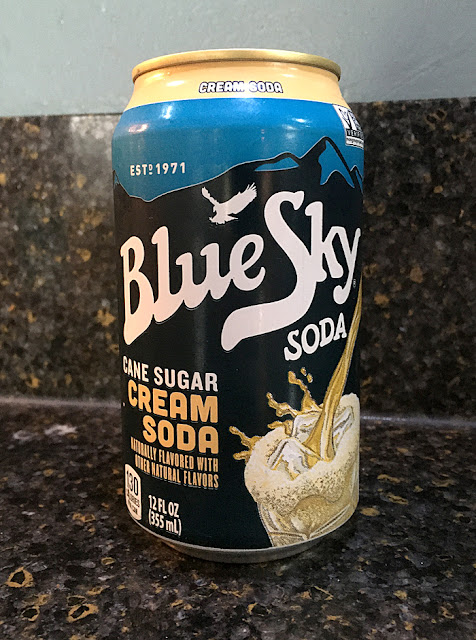 Review: OK, I'm not the BIGGEST fan of cream sodas... but this WAS pretty good. It was really sweet and SUPER smooth. It wasn't as life-changing for me as it was for the cashier. But my family and I all enjoyed it. If you are someone who likes cream sodas, make sure to give this a shot to see if the cashier was on to something...

Posted by Steve Stenzel at 2:06 PM No comments:

Rhett and Link recently tried some discontinued Pepsi flavors from 1991.

The entire video is just over 5 minutes long, and they start talking about the Pepsi at the 2:06 point.

My boys and I cracked into a wacky looking Japanese soda last night:

So yes... there was a plastic "opener" that got snapped out of the plastic cover, and then that got used to force the marble seal into the bottle. And note in that last photo that the glass bottle has a little "pocket" in it where the marble can rest. It's a very unique and heavy bottle - lots of glass "angles" in there. (VERY heavy considering it holds only 6.6 oz of soda!)

Sweetener: High Fructose Corn Syrup and Sugar (one of the few sodas that I've had that has BOTH of those on the label).

Review: The bottle was the funnest part. My boys loved watching me open it, and kids would LOVE this bottle. Kids shouldn't open it (as it takes a lot of palm down-force to open it), but otherwise this is great for kids as it's fun and it's not much soda. The grape flavor is just OK. Truly, opening the bottle was the best part. There's a slight bite to this that isn't super. I'm ranking this 1 point higher than I should (if I were basing it ONLY on flavor) because of the "funness" of the bottle.

Posted by Steve Stenzel at 11:03 AM No comments:

My boys and I spent a night at Forestville State Park recently, and this soda made the trip: 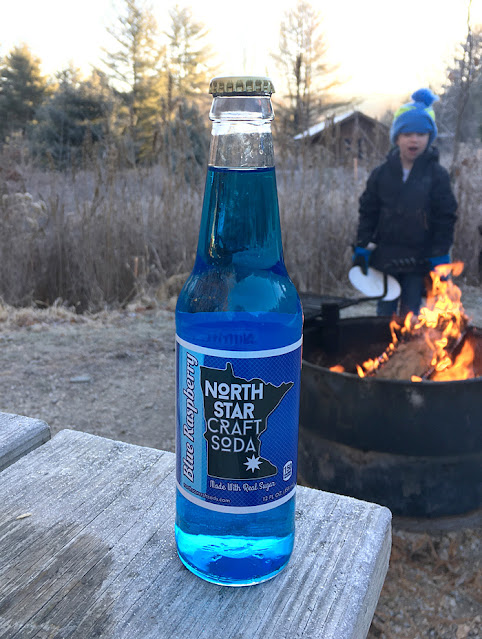 Review: This was my first soda from my recent soda resupply trip, and it is VERY sugary! It tastes like a liquid blue raspberry Icee, or maybe a liquid version of blue cotton candy (and yes, both of those are very sugary). It's pretty good and fun to drink - my boys LOVED it. If you like SWEET, then you'll love this. But it seems to be more of a "kids" soda instead of an "adult" soda.

Posted by Steve Stenzel at 6:07 AM No comments: