This morning, my boys and I stopped by Blue Sun Soda in the north metro (it's just a bit west of the 35E/35W split along Hwy 10). I got the boys some treats, and Daddy got a case of soda. Here are some photos: 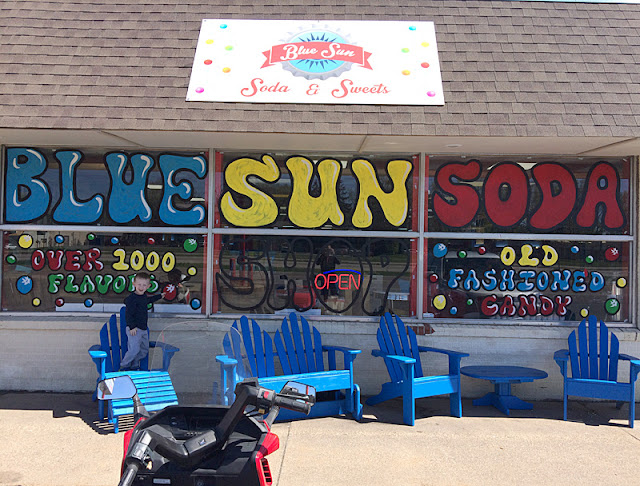 There were 2 younger guys working there, and they were super helpful and nice. Some of the first reviews I read after Blue Sun had opened noted problems with the staff, but these guys were great. My only complaint is super minor, and it's seen in that last photo: some of the more random flavors were just arranged by color. There could be a "novelty" soda section, but instead they were scattered a bit. Not too big of a deal, but that's seriously my only complaint with the place.


Those photos above were taken as we were sitting in their parking lot. We drove home as the boys enjoyed their snacks.


Check out Blue Sun Soda on Facebook, and stop in sometime. I know we'll be back!

Posted by Steve Stenzel at 3:23 PM No comments:

Email ThisBlogThis!Share to TwitterShare to FacebookShare to Pinterest
Labels: Blue Sun Soda, Candy, Made In Minnesota

I needed a caffeine kick the other afternoon, so I grabbed this: 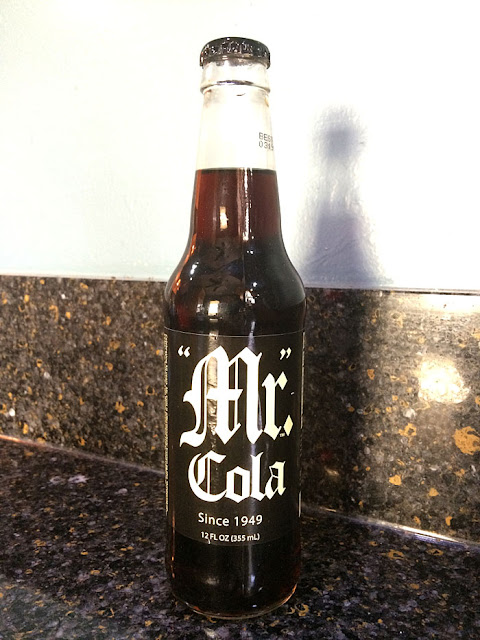 Review: This didn't stand out as anything AMAZING, but it was a decent cola. There was a slightly fruity hint to this, but otherwise, it was your standard cola. Good.

Posted by Steve Stenzel at 10:34 AM No comments:

After teasing Rocket Fizz about some horrible sodas in a post last week, I thought I'd try one of those sodas that actually sounded promising... 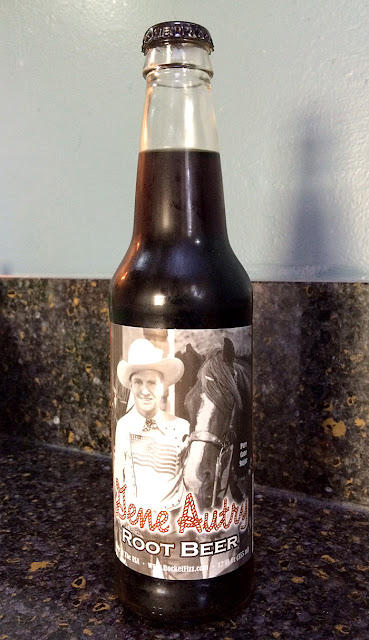 Review: This smelled like classic root beer, but had a bit too much anise flavor for me. It had a nice amount of vanilla. It didn't really have a bite, but it wasn't smooth either. It was "generically" OK, but (in my opinion) needed to be a bit smoother.

Posted by Steve Stenzel at 2:38 AM No comments:

I enjoyed this (with some pizza) the other night: 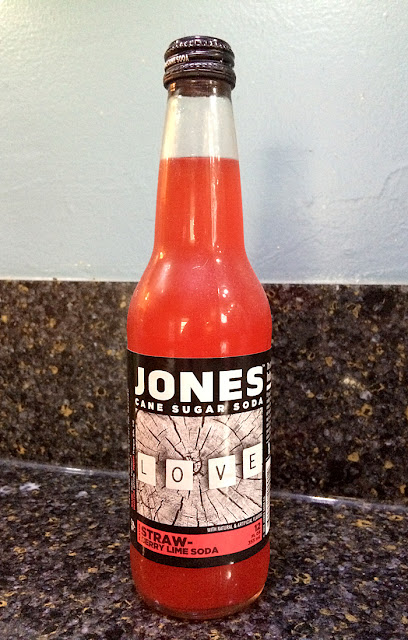 Review: Let it be known that "strawberry lime" would never be my first choice for a soda flavor. But this one was done well. Each sip started with the sweetness and smoothness of strawberry, and then ended with a little tart "kick" of lime. It was a nice balance.

Posted by Steve Stenzel at 9:12 AM No comments:

I found an article about a new Rocket Fizz store opening up in Portland OR. It's 3 years old, but it's written so hilariously snarky that I had to share it. Here are 2 great opening quotes of his first impression of the store:

They've got a massive selection organized on the "fuck it" system (the first and less prestigious invention of Dewey behind his eponymous Decimal system).

I considered the Snooki soda, but assumed it would be meatball flavor.


He went on to review these 4 sodas:


I've seen all of those, but I've never considered the coffee soda because I don't like coffee. I've been scared to try the ranch or buffalo wing because I HAVE had the bacon soda, and it was horrible. (In fact, in my review of it, I noted that it had the saltiness and smokiness of a "hairy, sweaty, Russian man.") Here were his 4 reviews of these novelty sodas:

Coffee Soda
I started here because it seemed the closest to a thing somebody might actually want. And I was right. It tastes nothing like coffee but was thoroughly delicious. More like a creamy root beer float. A good start. Maybe everything will be this good! (Spoiler alert: no)

Bacon Soda
It's been 10 years I've had bacon, but non-vegetarians like to remind me that it's delicious. So maybe the "artificial bacon" flavor in my soda will be an awesome experience I can enjoy while still maintaining my moral superiority at the breakfast table. Also it sounds like "baking soda" which is fun. Bacon soda... is not fun. It's got a wafting chemical smell, like chlorine or something, and tastes much the same. It has a slight aftertaste of meatiness, and a duringtaste of pure awfulness. It tasted less like a soda with bacon flavor and more like drinking the water out of a hot tub after a bunch of pigs just finished relaxing in it. Do not buy or consume this product if you are pregnant, may become pregnant, or was the product of a human pregnancy.

Buffalo Wing Soda
This seemed like the most outlandish flavor choice, so maybe it'll be the best? Actually, Buffalo Wing Soda tastes okay. I didn't detect the tiniest hint of buffalo sauce and the orange color tricked my brain into thinking it tasted like orange cream. I wouldn't really recommend this, unless you wanted a vague flavor and a funny label. If not, just buy an orange cream soda.

Ranch Dressing Soda
And the big finish... ranch dressing. Just popping off the cap revealed a nauseating smell that, an hour later, hasn't entirely left my apartment. There was a vague sense that I was drinking something ranch flavored, but it had such a strong chemically taste I was pretty sure this was ranch's evil robot twin. It tasted more like an industrial byproduct than a delicious mix of sour cream and herbs, like it was extruded from the ranch-sands of Canada. I was able to drink the least of this one and I even felt guilty pouring this one down the drain for fear it would end up in the river and a fish would take a sip and instantly vomit.

Bonus: Buffalo Wing (soda) dipped in Ranch Dressing (soda)
Since these flavors are frequently combined, I thought I'd try it.
Result: NOT BETTER.


Click here for the full article. This has me wanting to try the coffee soda, so maybe I'll have to grab that once "Minnesota's Largest Candy Store" opens up for the season.

Posted by Steve Stenzel at 4:43 PM No comments:

I really enjoyed Berghoff Root Beer nearly 3 years ago, so I had high hopes for their Black Cherry: 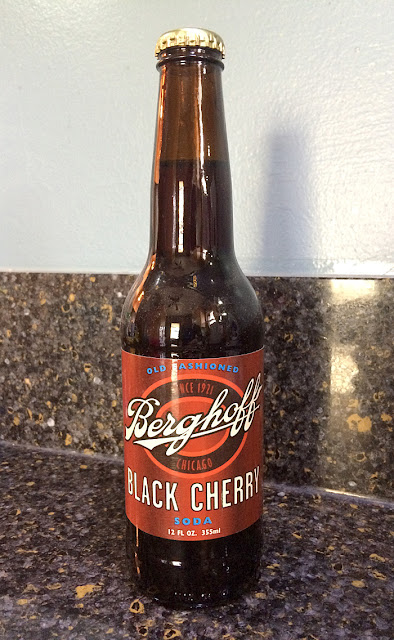 Review: From the first sip, I knew it was a unique black cherry soda. But I wasn't sure if I loved it right away. It was a little creamier than I would hope from a black cherry soda. It was definitely more like a "cream soda" than a "cola." In the end, I never fully got over the creaminess. It was OK, and you'd like it if you were in the mood for a cherry *cream* soda, but I'll give it just an average score.

Posted by Steve Stenzel at 7:37 PM No comments:

I've been seeing billboards like this around the Metro area for the last 2 months or so: 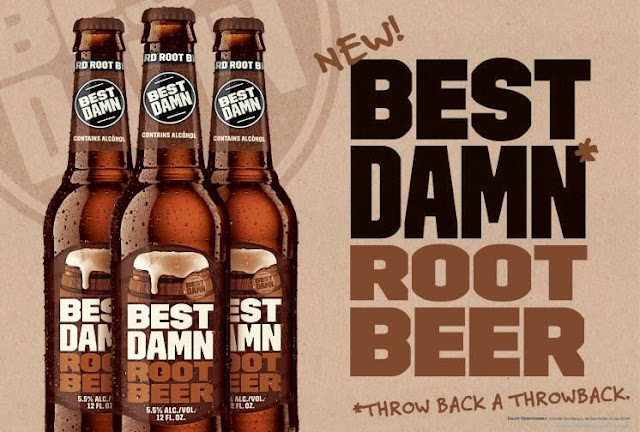 My wife and I were at the liquor store a few nights ago, and we saw a 6-pack, so we picked it up so I could try it. 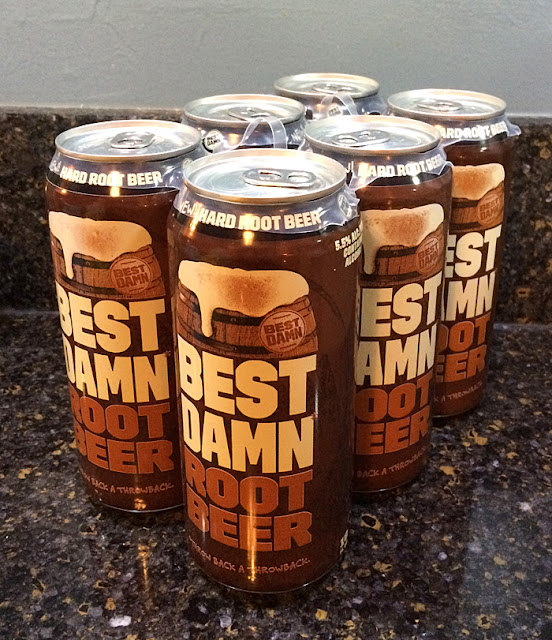 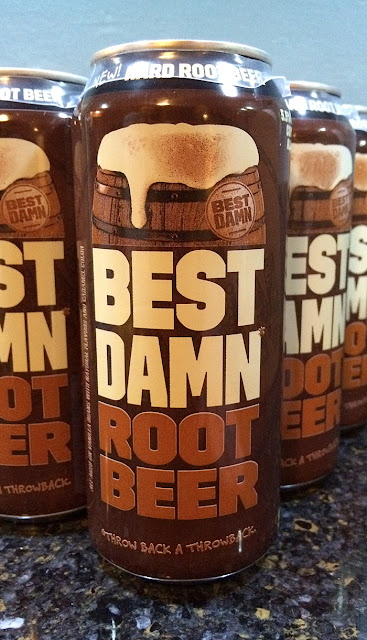 Sweetener: Nothing? I'm unsure on this. (Beer is labeled much differently than soda, and everyone online is mentioning they can't find an ingredients list for this.)

Review: It smelled good. The first sip had GOOD (classic) root beer flavor on my tongue. But then the yeastiness of the beer took over, and it ended with not a great flavor. There was a nice amount of vanilla flavor (and on the can it mentions that it's "ale aged on vanilla beans"), but that didn't make up for much. It was an odd flavor combo of root beer and beer that I didn't care for at all. The beer added a strange "bite" to the root beer.

I'm not a big beer fan, so that may be why I was less interested in this. But even on Beer Advocate, it's not getting good reviews and is currently ranked "poor" at 68 out of 100. One reviewer said "it tasted like someone took a cheap light beer and squirted some of that artificial "rootbeer-barrel candy" flavoring into it."

My wife mentioned it could make a good root beer float, so I may have to try that with some of the remaining 5 cans. The Best Damn Root Beer website has some recipes on it, so we might have to give a few of those a try. I'll update if/when I do. But for the time being, this score is just based on the Best Damn Root Beer by itself.

Posted by Steve Stenzel at 1:02 PM No comments:

I brought this to a board meeting last night: 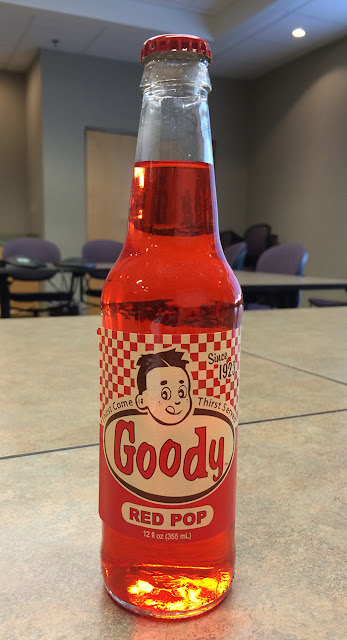 Review: I didn't know what flavor "red" was. But it was very bubble-gum-esque. It was a bit too sugary, and tasted like a kids drink. But I guess that was too be expected. Not bad, but just not stellar either.

Posted by Steve Stenzel at 8:49 AM No comments:

I meant to post this for April Fool's Day. This is stupid and gross. But it's slightly entertaining. This guy just bought an $80 bottle of 20 year old Crystal Pepsi.

Posted by Steve Stenzel at 10:01 PM No comments:

I tried this earlier today: 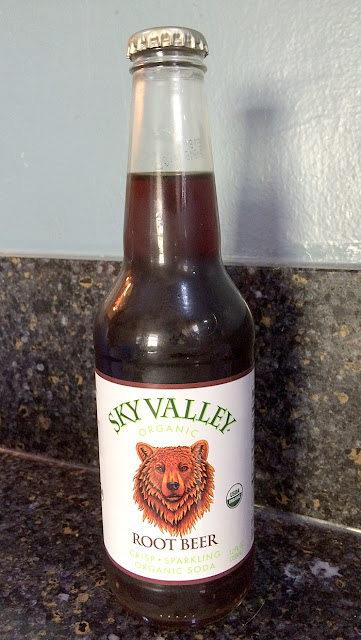 Review: This was terrible. Down right horrible. There was an odd sharpness to it, and I think it was from the sea salt and/or the apple cider vinegar found in the ingredients list. I thought the apple cider vinegar COULD be an interesting addition, but it made the root beer a little bitter. I only had a few sips - it was one of the worst sodas that I've had in a while. So this makes 2 horrible root beers that I'd have lately. I've got to change that soon...

Posted by Steve Stenzel at 3:20 PM No comments: