Years ago, I realized I loved root beer.  It took a few more years to realize that sarsaparilla was similar, and (in many cases) as equally delicious.

I had to do a quick Google search to find out the actual difference between root beer and sarsaparilla.  I found this (and I underlined things that I found important):

What is Sarsaparilla?
While the sarsaparilla essentially is also a 'root beer', going by its definition, the drink is made from the sarsaparilla root alone. The plant is a vine which is abundantly available in Central America. It's Spanish name zarzaparrilla is derived from the words 'zarza' meaning 'shrub' and 'parrilla' meaning 'little grape vine'. The Central Americans were apparently the first people who came up with the idea of using the extracts of this vine to prepare this beverage. The way they saw it, it had a remarkable medicinal value and there are many uses and hence till date considered to be a good medicine in treating syphilis. It also gained popularity later as a beverage in the old west. If you remember the Yosemite Sam character, which was loosely based on a guy from the old west, he often mentioned that he wants a 'sasparilly' and that he wants it 'really snappy'! Today, is a drink which is made primarily from this plant, without mixing it with anything else. As such, the sarsaparilla root beer recipe contains only one flavoring ingredient: the sarsaparilla itself.

So I tried a syphilis remedy sarsaparilla from my stash the other night: 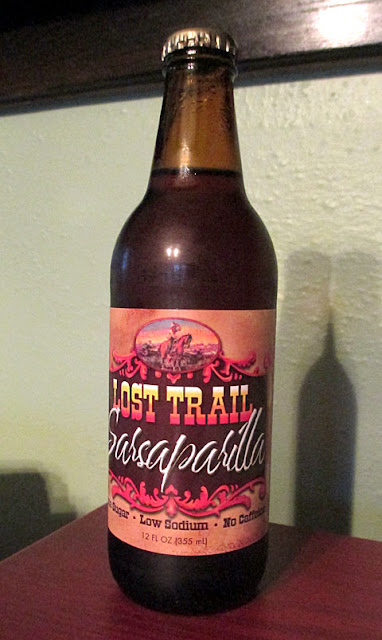 Review: This was amazing from the start. It's super smooth, and pretty flavorful. It's "rooty" and herby, and it tastes a bit of vanilla. The flavors work soooo well together. This is a sarsaparilla that could disappear in a second because it goes down so smooth.

Posted by Steve Stenzel at 1:00 PM